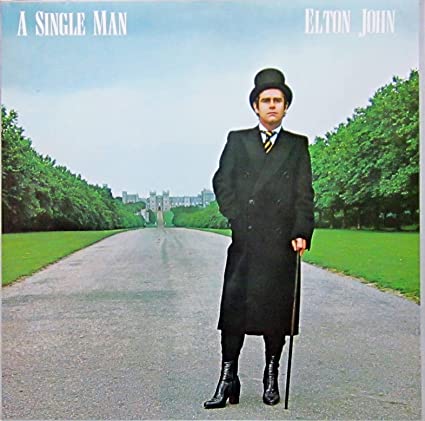 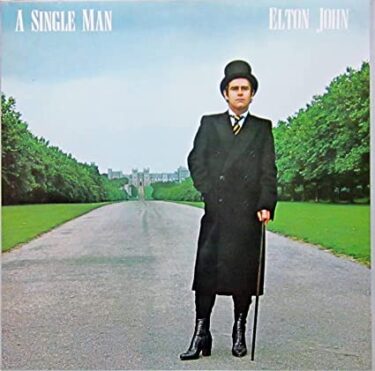 This time, I created a ranking of Elton John.

As I was selecting the songs, I was reminded that this man is an outstanding songwriter.

He has written many songs that an ordinary singer-songwriter can only write once in a lifetime.

He writes songs that most singer-songwriters only get to write once in a lifetime, and then he adds expressive vocals, playing the violin, and Bernie Taupin’s thought-provoking lyrics.

However, most of his good songs seem to be concentrated in the 1970s.

In this article, I have tried to focus only on that period. 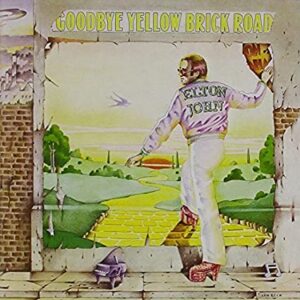 This song is about saying goodbye to “Yellow Brick Road”.

What is “Yellow Brick Road”?

It’s a city street that is supposed to lead to glittering success and wealth.

The term is taken from “The Wonderful Wizard of Oz”, a famous novel and movie.

In other words, at this time, he announced that he would stop walking the road to success in the city and return to the country life where he could return to his true self.

You can see the lush green countryside beyond the rubble in the jacket.

At that time, Elton was at the peak of his career.

If he released an album or a single, it would be a big hit.

According to one theory, this song was written by Elton’s writing partner, Bernie Taupin, as a message to Elton.

In other words, “Elton, you’re not in music for the success. Let’s go back to the basics.

By the way, Bernie is from a rural area where there is no electricity, and he and Elton have been friends since they were 17 years old.

They are not just business partners.

Perhaps the best place for them to be themselves is in the country, not in the city.

Elton took this into account when he wrote the beautiful melody and gave it an album title. 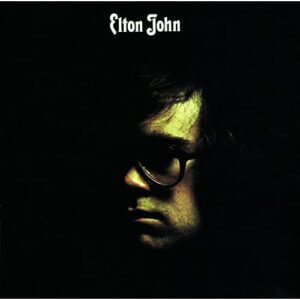 This song was on Elton’s second album when he was just starting out.

It was on this album that he became one of the stars.

It was his first big hit, the result of a triangle with producer Gus Dudgeon and writing partner Bernie.

There is an interesting anecdote about this song.

This song, now immortalized as a classic, was originally just a B-side to a single.

The A-side was “Take Me to the Pilot” and this song was on the back.

At that time, radio had a great influence on the music industry, and record companies were concerned about how to cut a single song that would be liked by disc jockeys.

However, even though this song was the B-side, radio DJs only played this side.

So now this song is the A-side and “Take Me to the Pilot” is the B-side, and the positions are reversed.

Elton was only 23 years old at the time.

He was only 23 years old at the time, and it is truly an amazing talent to be able to write such a universal melody at such a young age. 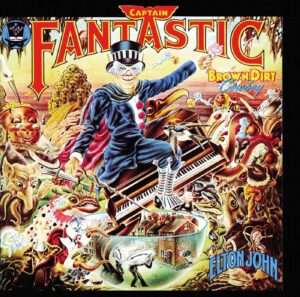 There is also a famous anecdote behind the birth of this song.

Elton had a female fiancée at the time of his debut, but Elton was not positive about marriage.

So when he went out for a drink, he told his friend Long John Baldry about his problems and he was advised to call off the marriage.

The name “Elton John” is his stage name, not his real name.

So he was a trusted friend.

Elton took the advice of his friend and broke off the engagement.

I feel sorry for the woman who broke off the engagement, but at the time, Elton was so distressed that he thought about committing suicide, so I don’t blame him.

The main point of this song is the earnestness of Elton’s vocals. It is truly a rendition. 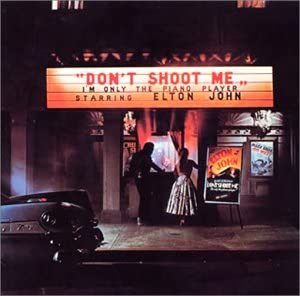 This is one of Elton’s most enjoyable songs.

This is the song that introduced me to this man.

I was a junior high school student listening to punk music at the time, and I could never accept the fashion of wearing weird hats and flashy sunglasses.

I also thought this song was uncool at first.

I thought, “What the hell is ‘Crocodile Rock’?

But I listened to it, though.

I thought it was kind of a fun song.

I thought it was kind of fun. This song is about a fictional hit song called “Crocodile Rock” that you look back on and remember fondly.

When she was young, she listened to “Crocodile Rock” and said that if she wore a dress, she would have had the best Friday night ever.

It’s an interesting and elaborate setting.

This Album is a 2-disc set and is considered to be his masterpiece.

It certainly has a lot of great songs, and there are a few others that are almost as good.

After all, “Saturday Night’s Alright for Fighting” and “Candle in the Wind” are also on this album.

I’ve chosen this song over those brilliant songs.

Elton’s songs do not have the image of being sophisticated.

However, there are some songs that are stylish, like this one.

This song is so sophisticated that it reminds me of Benny Sings, although I didn’t associate it with the song title.

In fact, this song has been accepted by listeners in a different way than his previous songs.

It was the first Elton song to enter the Top 40 of the Soul Music Charts.

Perhaps it was the falsetto vocals that made it so popular.

Elton later moved closer to Philly soul, but I think the souliness started to surface around this song. 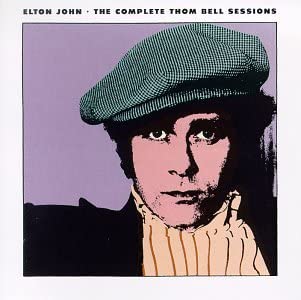 This song could be said to be an extension of “Bennie and the Jets”.

During this period, Elton was tired of the show business world and was almost in retirement.

He had been working on a song, but was unable to finish it.

This song was completed by Thom Bell, a big producer of Philly Soul who was on a roll at the time.

This 6-song mini-album, which is not counted as an original album, is a hidden masterpiece.

It also contains other gems such as “Country Love Song”.

But isn’t it strange to see Thom Bell, M.F.S.B., and The Spinners’ names in the credits of Elton’s album?

Incidentally, this song later became a club hit, causing the rare phenomenon of it reaching number one on the charts almost 30 years later.

If you only know the old Elton John, you may not know this song.

However, if I had to choose a representative song at this point, this song is indispensable.

7位「Daniel」(Album:Don’t Shoot Me I’m Only the Piano Player)

This song is one that I want to enjoy Barney’s lyrics.

The older brother, whom the main character in this song adores, lost his eyesight during the Vietnam War.

When he returns from the war, he is treated as a hero by his country, and his brother is proud of him.

However, he does not want to get caught up in the hustle and bustle and is about to leave his country and travel to Spain.

The lyrics of the song are probably about the misery of war, but they are not direct.

All we have here is the perspective of a younger brother who misses his older brother.

In Elton John’s music, I think the lyrics are very important.

Sometimes, like in this song, the lyrics seem to be taken from a part of a novel, and you can enjoy the lyrics alone.

The lyrics of this song are only about my brother’s departure by airplane, but it is wonderful to see how the lyrics expand to reveal various backgrounds.

The lyrics are just a scene of his brother’s departure on an airplane, but it is wonderful to see how the song expands to reveal various backgrounds. Elton has written a gentle and delicate melody to respond to the lyrics, and has placed it on the first track of the album. 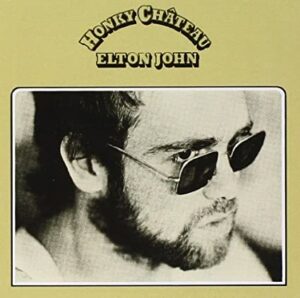 In this song, an astronaut sings about the lonely feelings of being away from his family.

Maybe the main character wants to be happy as a family man and a father rather than fame as an astronaut.

As I read Barney’s lyrics, I sometimes feel that there is a consistent message.

The message is that no matter how much success and fame you have, it is important to be your true self as a human being.

And I’m sure Elton himself shares this message.

The meeting of a singer/composer and a lyricist who share the same feeling has created a magic in its heyday.

Incidentally, many of you may know that Elton is bisexual.

On the other hand, Bernie’s love life seems to be with women only, so they don’t seem to have that kind of relationship.

The official video I mentioned above is very beautiful.

It’s a great piece of work, so even if you know this song, please check it out. 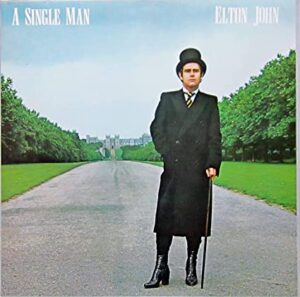 I chose this song because I wanted to pick one super pop song.

Before this Album, Elton has made a big decision.

Before this album, Elton made a big decision: he left Gus Dudgeon and Bernie Taupin, who had been giving him hits in his prime.

Prior to this album, Elton had once declared his retirement and focused his life on managing and producing a soccer club.

Perhaps he wanted to get away from his position as a rock star.

This album jacket exposes his bare face instead of his trademark flashy sunglasses.

Wearing a hat, which is said to be to hide his thinning hair, Elton stands alone in a place with a good view.

Written on it are the words, “A Single Man Elton John.

The production was changed to Elton himself and Clive Franks, and the sound is more sophisticated than before.

The lyrics are written by Gary Osborne, but I think he is not as good as Bernie.

This song is about “Part-Time Love,” or infidelity.

There’s a phrase, “Everybody’s looking for an affair,” but I don’t think that’s true. 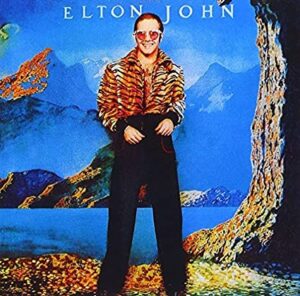 This song is one of those songs that you slowly realize how good it is.

In fact, I didn’t understand it when I was younger.

When you are young, you tend to jump to songs that you can easily understand.

This song, on the other hand, is five and a half minutes long, but it doesn’t start to get exciting until about two minutes in.

It was during this time that I used to be itching to skip the song.

I used to want to just listen to the number of songs and jump to the next song or the next Album, like “Yes, next.

I guess there are some songs that are just difficult to understand in that way of listening.

Many years have passed since then, and the phase of listening to many songs is over, and now I genuinely enjoy the music.

I guess I’m finally starting to understand the beauty of this song.