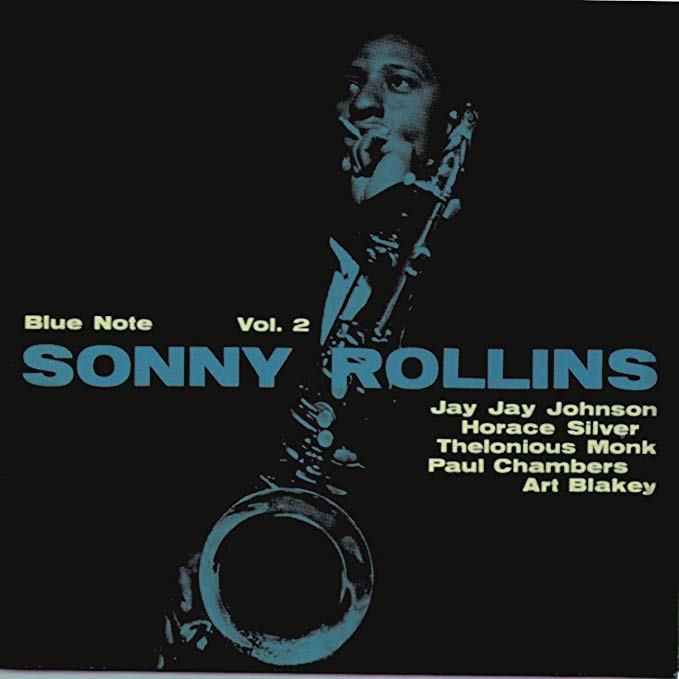 This time I created a ranking of Sonny Rollins.

Probably most of the people who come to this blog are not jazz fans.

In fact, most of the artists I feature on this blog are rock and pop musicians.

However, I would like to suggest to those listeners that they should try listening to jazz once in a while.

If you are not interested in jazz, just listen to the last two songs and you will be happy.

If you think those two songs are so-so, please start listening to the first song.

If you are a jazz fan, please start with the first song straight away. 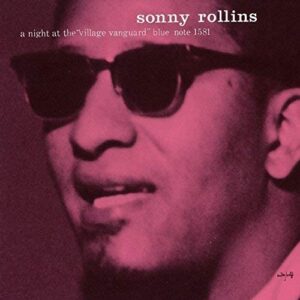 If I can just get rock fans to listen to this song, half of my goal will be accomplished.

Isn’t there a tendency to think of jazz as fashionable or atmospheric music?

This song is not like that, it’s jazz with a wild flavor.

However, I am not a hardcore jazz fan.

But I’m not a hard-core jazz fan, and even though I am, I think the rawness and enthusiasm of this performance is wonderful, and I just had to recommend it.

I was so impressed by this performance that when I went to New York, I even went to the restaurant where it was performed.

As you can hear, it’s a live album.

The relationship between Rollins’ tenor sax and Elvin Jones’ drums is thrilling.

On the surface, there may be many other performances that are more intense than this one.

However, there are few that can match this song, not in terms of superficial intensity, but in terms of overwhelming imagination. 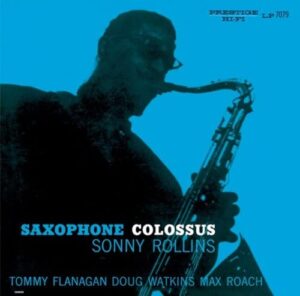 This Album is generally referred to as one of the greatest jazz albums of all time.

Jazz fans often discuss the unlikely topic of “What is the greatest jazz album of all time?

It is frequently featured in magazines and books.

In such projects, this album is a regular in the top three.

The other songs on this album include the calypso-style “St. Thomas” and the deep ballad “You Don’t Know What Love Is”.

Five songs of completely different types, each of which is a masterpiece of the highest level.

Which one to choose may vary from person to person, but I like this one the best.

No.3「On a Slow Boat to China」(Album:Sonny Rollins With the Modern Jazz Quartet) 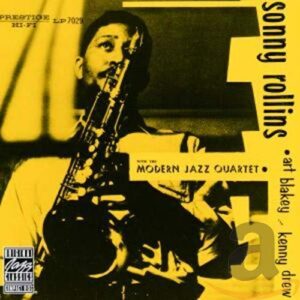 This song is also the title of a novel by Haruki Murakami.

It’s a famous story, but Haruki Murakami used to own a store that played jazz music.

In other words, he was a jazz professional and thought it was a good enough performance to be the title of his book.

At that time, Rollins was still a fledgling saxophonist.

By the way, although the album title says “Modern Jazz Quartet,” they did not perform together on this song.

At that time, he had just experienced his first recording under the arrangement of Miles Davis.

Nonetheless, his personality is already established.

In 2:48, which is exceptionally short for a jazz song, his charm is concentrated.

In a word, Rollins’ performance can be described as “the ultimate humming.

This performance is a typical example of this, as he plays the melody as it comes out naturally, without any hint of pretension. 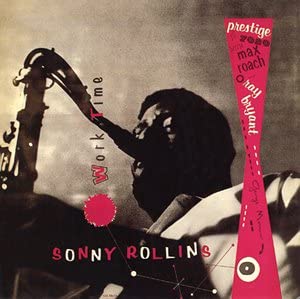 This song is the one that got me hooked on Rollins.

At first, I didn’t understand what Rollins was all about.

There is something about his music that no one else can copy, even though he seems to be doing something simple.

I couldn’t appreciate it in the past, so I decided to listen to this song over and over again.

At the time, I was mainly listening to rock music, and there were many other albums that I needed to listen to.

One day after I had no choice but to listen to it over and over again, I started to understand what everyone was saying.

Rollins has a rather unique sense of time, and he can stretch and shrink phrases, catch up from a later groove, and so on, at will.

It’s a performance that cannot be contained in a metronome-like time interval.

I listened to it so much at the time that I can still hum Rollins’ ad-libs to this song.

However, even when I hum while listening to this song, I can’t quite get the timing right.

It may be similar to how people who are practicing an instrument often say that they only understand the true value of a song when they copy it. 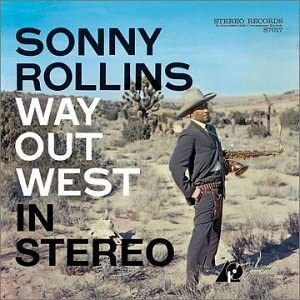 This song was written by Duke Ellington.

Although it is a standard number, it is not an easy song to sing.

In spite of this, it has been covered by a surprising number of rock and pop players, including The The.

It has also been covered by jazz players, and one of the best is this version by Rollins.

This is the only Rollins ballad I have included in my ranking, but there are many other great songs.

Rollins is very eloquent in his up-tempo and medium-tempo songs, but his taciturn and unsophisticated side sometimes comes out in his slower songs.

This album is a so-called piano-less album.

This song is a ballad, but it is not just a sweet performance.

You can enjoy Rollins’ simple charm in this song. 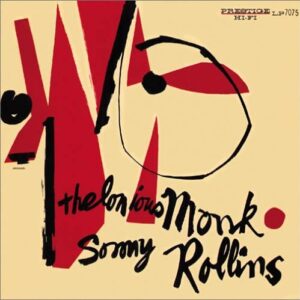 This album is a joint album with Thelonious Monk.

Rollins is a good friend of Thelonious Monk, and they have worked together on many masterpieces, not only on this album.

Here are some of the patterns that tend to produce Rollins’ masterpieces.

Piano-less
The piano and guitar should not be too eloquent.
Performances with incendiary drums.

I sometimes think that Rollins is uncomfortable with situations where there are people singing too much besides himself.

Maybe he is the type of person who speaks eloquently, but wants others to take a step back and be a good listener.

Come to think of it, when Rollins joined Clifford Brown’s group, he was lackluster, probably because Clifford was also eloquent.

Thelonious Monk, however, is not the type of pianist who fills in the gaps in his sound.

With his best listener, Rollins was able to bellow to his heart’s content. 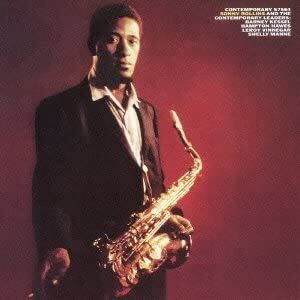 I think that Rollins’ playing is often described as masculine and generous.

It can also be called humorous.

This song is probably one of the best examples.

From the very beginning, the theme of this song is fun and relaxing.

“Contemporary” is the name of the label that released this album.

Contemporary” refers to the label that released this album, as well as to the big names who played on it, such as Barney Kessel, Shelly Manne, and Hampton Hawes.

But Rollins doesn’t care about that.

This is the first song on the album.

Is it my imagination, or does the jacket also look a bit like he is proud of it? 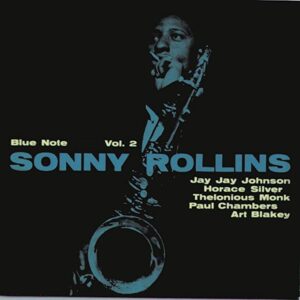 This album is said to be one of Rollins’ masterpieces.

All of the songs on this album are wonderfully performed, and “Why Don’t I” is a must-hear.

The label is Blue Note.

The label is Blue Note, and they are very meticulous about the songs they record, the recordings, and the album jackets.

This album contains two of the three factors for success that I mentioned earlier.

This album has two of the three factors for success I mentioned earlier: the collaboration with Thelonious Monk and the incendiary drums.

The drummer for this song is Art Blakey.

Blakey is like an athlete who inspires his team and encourages them to attack.

In terms of details, I think Blakey’s playing at 3:37 is great.

Some people say he sounds like an old-fashioned drummer, but he’s surprisingly nostalgic, and his attention to detail makes his co-star sound great.

Blakey’s dedication is what makes this a great performance.

Elsewhere, J.J. Johnson’s trombone is involved with Rollins in places. 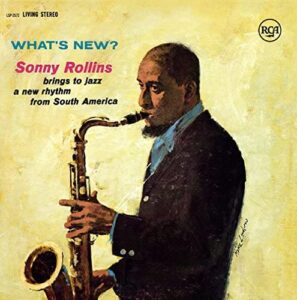 This song has a Latin feel to it.

Shortly before this album, Rollins retired from the jazz world.

His retirement at the peak of his career was regretted by many people.

It may be hard to imagine from his positive performance, but Rollins is a surprisingly sensitive and seeking person.

He has always tried to reflect on himself, joining the Rosicrucian Mystic Circle, practicing Zen and yoga, and so on.

He came back to life after two years and released this album.

This album gives me a bright impression that he has come out of his shell.

Rollins’ performance on this album is not what you would call jazz-like.

However, the performance of this song brings back Rollins’ natural and unadorned style.

Initially, I had set a limit of one song from each album.

At first, I had set a limit of one song from each album, because I have more than 40 Rollins albums, and I thought I wouldn’t be able to introduce them fully if I didn’t decide that way.

However, I really wanted to choose two songs from this album.

This album is often ignored by jazz fans, but I think it is a hidden masterpiece.

Jim Hall plays a big role in this song.

Jim Hall is a guitarist with an aesthetic of pulling back.

Rollins, on the other hand, is also in fine form, showing us his innocent singing spirit.

Incidentally, Rollins also sang on The Rolling Stone’s classic “Waiting On A Friend” later in his career.

When the song needed a saxophone at the time, Mick Jagger asked Charlie Watts who was the best jazz tenor.

Charlie thought there was no way he could call him, but he told him Sonny Rollins, and was surprised when Rollins came to the recording session later.