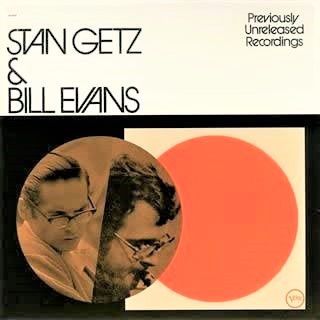 In this article, I have created a ranking of Stan Getz.

Since he is a giant in the jazz world, there is no end to the number of good performances that I could introduce to you.

Half of the songs are bossa nova, but there are many other songs that will make you feel at home. 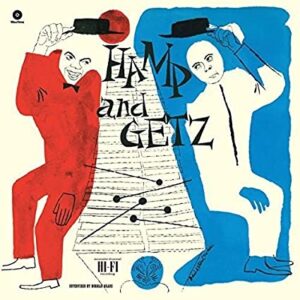 I think this album is in the obscure category, but I think it is a hidden masterpiece.

Getz’s tenor saxophone is especially dynamic on this track, and he plays as if he is going to climb all over the place.

The performances of the 1950s are getting hotter than before, and this may be one of the best examples of that.

This Album is a joint effort with vibraphonist Lionel Hampton.

Lionel Hampton is best known as the author of the famous jazz standard “Stardust”.

Unlike the slow “Stardust,” Lionel Hampton also plays with a lot of enthusiasm in this song.

The vibraphone that cuts through the song from around the six-minute mark is a must-hear. 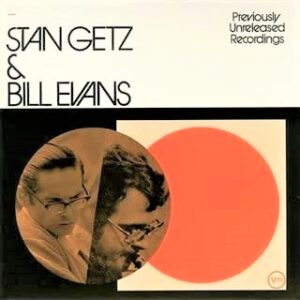 This is a joint work with Bill Evans.

The intro is the usual Bill Evans style, played prosaically.

Getz’s saxophone finally starts at 1:16, and the way he sings in the beginning is superb.

The melody of this song is just wonderful.

Bill Evans has a lovely self-penned song called “altz for Debby,” but this song was not written by Bill.

Getz liked this song so much that he also played it on “Getz/Gilberto #2,” which also features Gary Burton on vibraphone.

I think it’s a shame that such a good song is not played more often by anyone other than these two musicians. 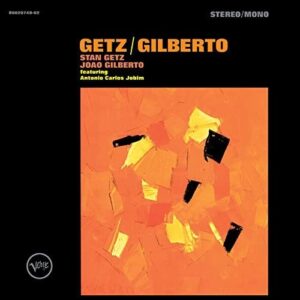 I’ve listed some of my favorite bossa nova songs by Getz, simply because I like them.

We start with the clear vocals of Astrud Gilberto, this was her first recording.

At the time, she was an amateur in the position of João’s wife.

It is said that she happened to accompany him to the studio and he suggested that she try singing, and she was accepted.

In reality, however, Astrid had always wanted to be a singer, and she seemed to have a strong desire to sing from the beginning.

When he actually came to the studio, Astrid volunteered to sing.

On the other hand, Creed Taylor, the producer, also thought it would be better to have an English song in order to be accepted in America.

The truth is that their interests coincided in a way that had nothing to do with Getz and Joan, who were supposed to be the main characters. 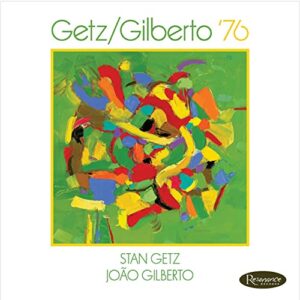 It is not just one bossa nova song, but a song with a special meaning.

It is said that this song was the first bossa nova song recorded in 1958.

In other words, the bossa nova as we know it today may have started with this song.

However, there are many people who say that Getz is not good at bossa nova, and actually I partially agree.

However, there are some great performances, such as this one.

In my opinion, bossa nova is forbidden to be too dense, too eloquent, or too big-brotherly.

Getz avoids those landmines in his performance. 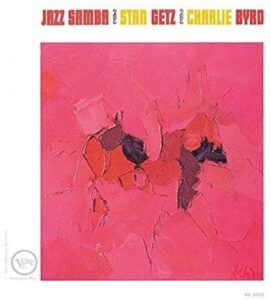 I think there is a tendency that the older jazz fans are, the less they like Getz’s bossa nova.

I like to think of it as easy listening, not jazz.

I believe that Getz’s improvisation was at its peak around 1950.

When I listen to it now, miraculously, the phrases have not aged.

When I listen to his masterpiece “Complete Roost Recordings” from that time, I feel that he already had the ability to play like this.

For example, there is a song called “Yesterdays,” which is regarded as one of the definitive masterpieces of the time.

The interpretation of the melody with rich shades is just as good as it gets.

The listeners at the time may have heard it as a kind of high-class easy listening. 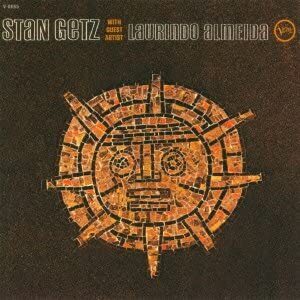 I think this song is quite a classic.

I’ve only heard it on this album and Dusko Gojkovic’s “Samba Tzigane”.

I heard that this song was quite popular at one time, but due to some factional disputes, it has become a forgotten classic.

Well, Stan Getz released 7 albums in 1957 and 5 albums in 1958, so you can see that he was quite a successful artist at that time!

At that time, he was working hard to earn money for drugs, but he still didn’t have enough money.

In 1954, he was convicted of burglary to obtain morphine for injection.

In 1954, he was convicted of robbery to obtain injectable morphine, and was later sentenced to prison for heroin addiction.

At the end of the 1950s, when he was in the midst of his drug troubles, he moved to Scandinavia and lived in seclusion, leaving jazz behind for a time.

So at that time, he himself was almost forgotten, just like this song. 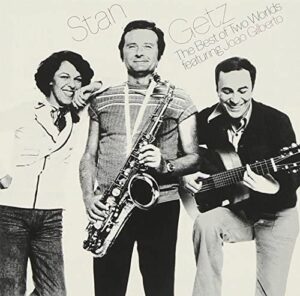 This is also the sequel album to “Getz/Gilberto” and João Gilberto also participated in it.

It is said that during the recording of the first “Getz/Gilberto”, the two had a rather acrimonious relationship.

When Joan asked Antonio Carlos Jobim to translate and deliver a cuss word, a troubled Jobim told her, “Your tenor is wonderful.

Getz, however, looked at Joan and replied, “I don’t think he said that.

If you look at the jacket with this in mind, don’t you think the contact between Getz in the middle and Joan on the right looks a little unnatural?

Now let’s look at the back jacket. 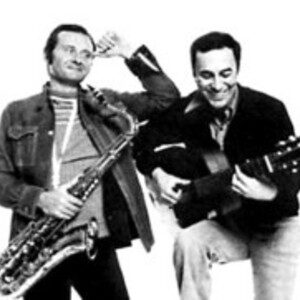 It is probably a composite photo.

There is another thing I have long wondered.

Why does Getz have such a rough blow when he plays with Joanne?

Perhaps Joan didn’t like the fact that Getz would interrupt her after her performance with loud noises that would break the mood of the song.

Perhaps the deterioration of his relationship with Joan affected his performance.

But how about this song, for example?

The way the song starts at 1:28 is a bit abrupt, but the band plays in a way that is very Sabafu-like, leaning in close to the vocals of Heloisa Buarque, who is known as Miucha. 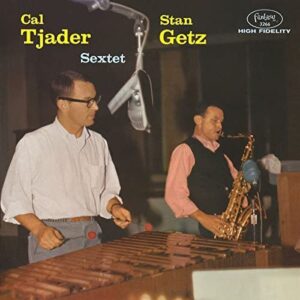 He had already made a name for himself in his youth with his cool playing.

Later, around 1952, he began to play with more warmth.

In the process, he played with many different people and succeeded in expanding his musical range.

Here is a list of his major collaborators in the 1950s.

They are all big names. It must have been very stimulating.

One of the most unique performances was with Cal Jader.

This song is a very relaxed performance.

I like the relaxed performance of this song and “Stan Getz Plays”. 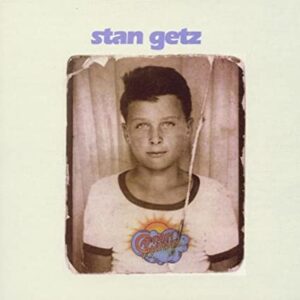 This song is famous for Return to Forever.

If you are familiar with the original, you may think that the performance also sounds like Return to Forever.

That’s because this song has three members that are duplicates of Return to Forever.

Since the same songs are played by almost the same members, it’s not surprising that they are similar.

The difference is that Joe Farrell is now Getz, and this one has Tony Williams on drums.

Getz has had a very close relationship with Chick Corea since they played together on the classic “Sweet Rain”.

With the support of the up-and-coming young player, Getz blows strongly.

Maybe it’s because Tony’s drumming is fueling it.

The two veterans are playing hot and the youngsters are playing calm, and the gap between them is interesting. 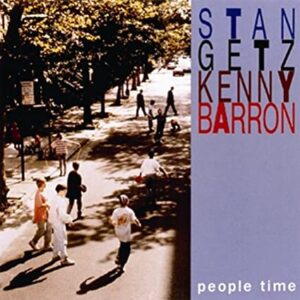 He was born into a poor family and showed an early talent for music, which gradually led to his indulgence in drugs.

Once he shed his drug addiction, he then became an alcoholic, and in later years he battled cancer.

People who don’t like Stan Getz say that they know he is good, but they can’t be moved from the bottom of their hearts.

I have felt that way at times, but I thought it might be because the music was too beautiful.

However, this posthumous work of his may be different from his usual performance.

At this time, Getz’s cancer had progressed and he was already in a terminal state.

This live performance was given in March 1991, but he died on June 6 of the same year.

According to Kenny Barron, who played with him, Getz was on the verge of death at this time.

Perhaps because of this, the music here does not have the sweet fluidity of the early days.

But nevertheless, there is something ruggedly appealing about this performance.

At the end of the piece, his performance seems to have taken on a new intensity.